1600-1870  Indigenous people – the Stoney First Nations living on the plains would come into the Bow Valley on trapping and hunting expeditions – travel past Castle Mountain thru Vermillion Pass en route to the Columbia Valley. They were considered fierce warriors and cunning hunters. Many of the names in the Rockies came from their language and heritage (Minnewanka Lake, Saskatchewan River, Yoho National Park, to name a few).

1856-1858 – The British led Palliser expedition explores the Canadian Rockies and the Bow Valley, following the Bow River past Johnston Creek.  Captain John Palliser, Eugene Bougeau, James Hector and Thomas Blakiston gathered information on what was then “Rupert’s Land” – a decade before Canadian Confederation in 1867. Many of the peaks that surround the Canyon were named by Hector on this scientific and map making mission. Outside of a few missionaries and some Hudson Bay trappers, this is the first western glimpse and exploration of the Canadian Rockies.

1885 – CPR builds the railway through the Rockies to unite Canada. A gold seeking prospector named Johnston camps out at the creek head which now bears his name with the hopes of discovering gold while panning in the canyon silt. Johnston never discovers any gold and by summer’s end, moves on to the Columbia Calley.  Silver City (a gold mine town similar to Dawson in the Yukon) springs up at the base of Castle Mountain eclipsing Calgary with a population of 2000 people. 15 years later is a ghost town.

1900-1915 – Tourism in the Rockies has begun with wealthy Europeans and Alpine Swiss guides exploring many of the unclimbed peaks. A small log teahouse is built at Johnston Creek as a rest stop for the horse drawn tallyhoes on route from Banff to Lake Louise. 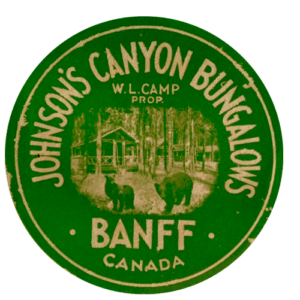 1910-1918 – a meandering dirt trail with 6 log bridges spanning back and forth across the Canyon to the lower falls is constructed – partially by Hungarian  internment camp prisoners from WW1. The Internment camp was 7 km away located beneath Castle Mountain.

1926 – Walter and Marguerite Camp purchase the log teahouse for $3000 and develop a bungalow motor camp with small cabins.

1927 – Every evening in the summer Walter provides interpretive talks to guests outlining all the scenic attractions, with amusing anecdotes.

1928-1930 – Walter explores the Canyon above the lower falls and discovers 6 additional falls. He takes the Parks superintendent, Jennings, up the Canyon who then approves Walter’s plan to build a pony trail to the upper falls so that guests can experience the full grandeur of the Johnston Canyon.  Pony trail to the upper falls officially opens to the public.  Walter names the various Falls – Stella and Marguerite most notably.

1930-1944 – The Depression and WWII take serious toll on tourism and business. Walter continues to expand the bungalow camp with direct permission from Prime Minister Bennett.  Bennett tells Walter expand now because “I’m certain to lose the upcoming re election.”  Bennett does lose and Walter pushes forward with cabin expansion, increasing bungalows from 4 to 20 units.

Marguerite and Walter have four children: Bennett, Dolena, Stella, and JJ. All work at the Canyon since childhood, and in time so do their children and grandchildren.

1950-1960 – Promise of a new transCanada highway to be routed past the bungalow camp encourages Walter to build a new lodge to accommodate the increased traffic. The government flips on the decision and HWY 1 takes a different route on the opposite side of the Bow River far away from the Bungalow Camp. Business plummets. However, sightseeing buses increase visitation.  A young 21-year-old Englishman named Bill Nokes becomes a Brewster tour driver, meets Walter’s daughter Stella at age 21 – a waitress at the Canyon – and they marry in 1958.

1978-1979 – Walter gives his final entertaining lecture (interpretive talk) to guests while in a wheel chair at 83 years old.  More than 50 years has passed since his initial presentation.  It’s been estimated over 1/2 million guests attended these talks.

1980 – Stella Nokes (daughter of Walter and Marguerite) and husband Bill take over the operation.  All seven bridges are replaced with suspended catwalks up the canyon walls. The highway 1A is officially titled “the Bow Valley Parkway” and Parks Canada lowers the speed limit as well as implements self-guided pulloffs.

1996 – A politically motivated report titled The Bow Valley Study is created with over 500 recommendations for the mountain parks. Under Sheila Copps, the Heritage Minister, Parks Canada commits to 125 of the recommended actions. One action in particular is extremely controversial – without any supporting scientific evidence – it calls for the full winter closure of the Parkway and to close off all vehicle traffic in the summer. Transit buses would then be operated as the only access to the Parkway and Johnston Canyon.

1999 – Tao Berman, a young kayaker, breaks the Guinness world record for waterfall drops by kayaking over the Upper Falls (98 feet) … and lives. 8 people have died in the Canyon over the past 9 decades in various tragic accidents.

1996-2015 – The Canyon actively fights the recommendation for a full Parkway closure in favour of a more moderate and sensible alternative to full closure to the public.  Parks Canada concedes to a seasonal closure (spring only – from 8 pm to 8 am March 1 – June 25). Out of the 125 actions dictated from The Bow Valley Study of 1996 – this was the only one overturned and modified.

2013 – Massive flooding and mudslides in Alberta and the Rockies shuts down the Parkway for two weeks and the Canyon as well.

2017 – Huge Wind Throw (wind storm) takes out ten hectares of forest 1/4 km from the Canyon – splitting and felling trees and closing the Parkway and Canyon trail for 2 weeks.  Massive fires throughout the summer cause enough smoke in the valley to issue health warnings on Canada’s 150 anniversary year.  Tourism is booming as Canada becomes a very safe a desirable location in the world. 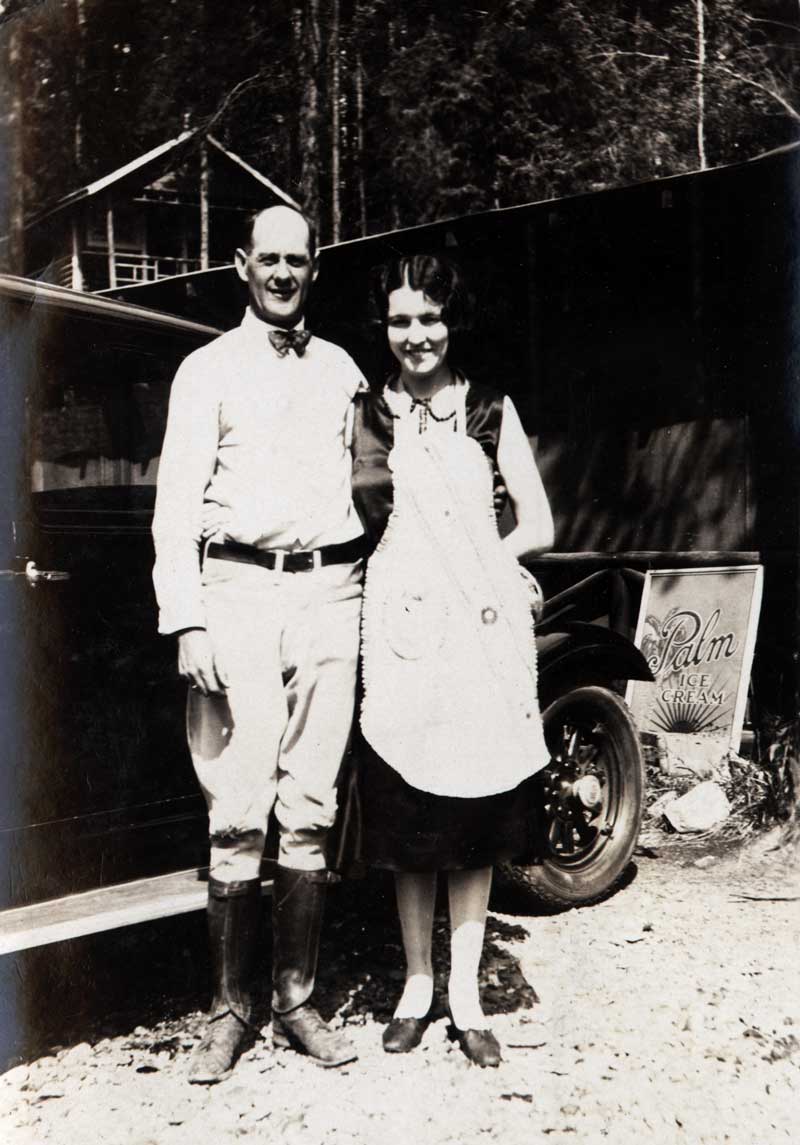 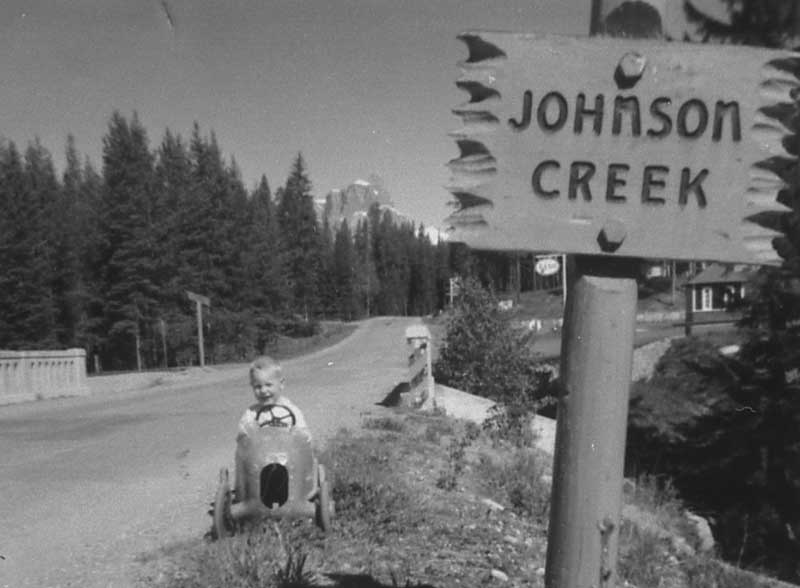 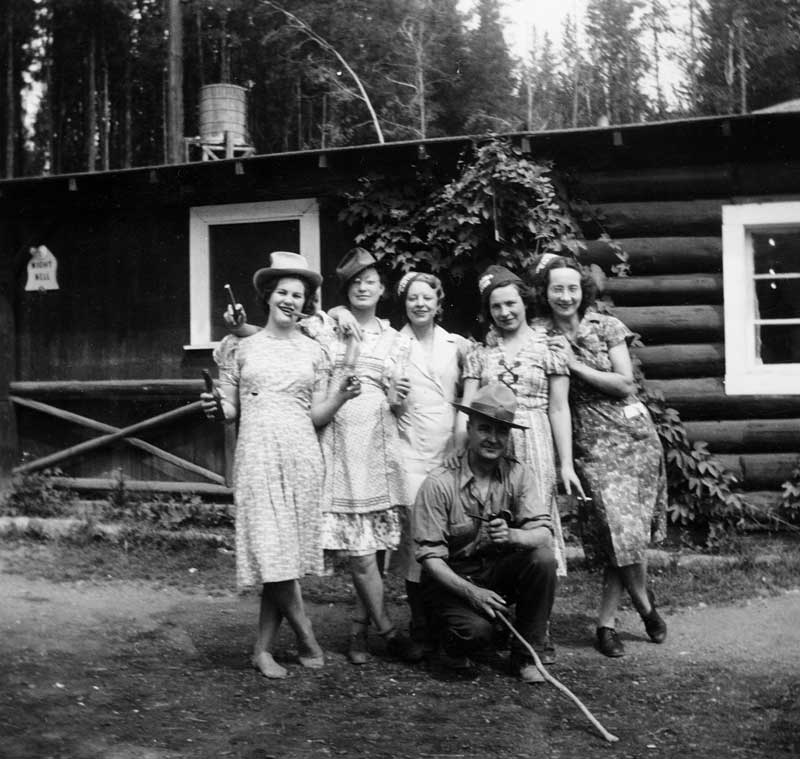 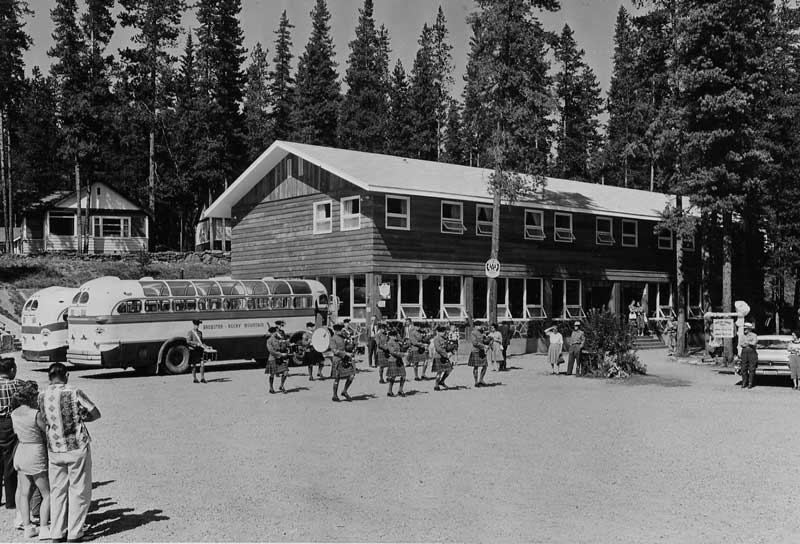 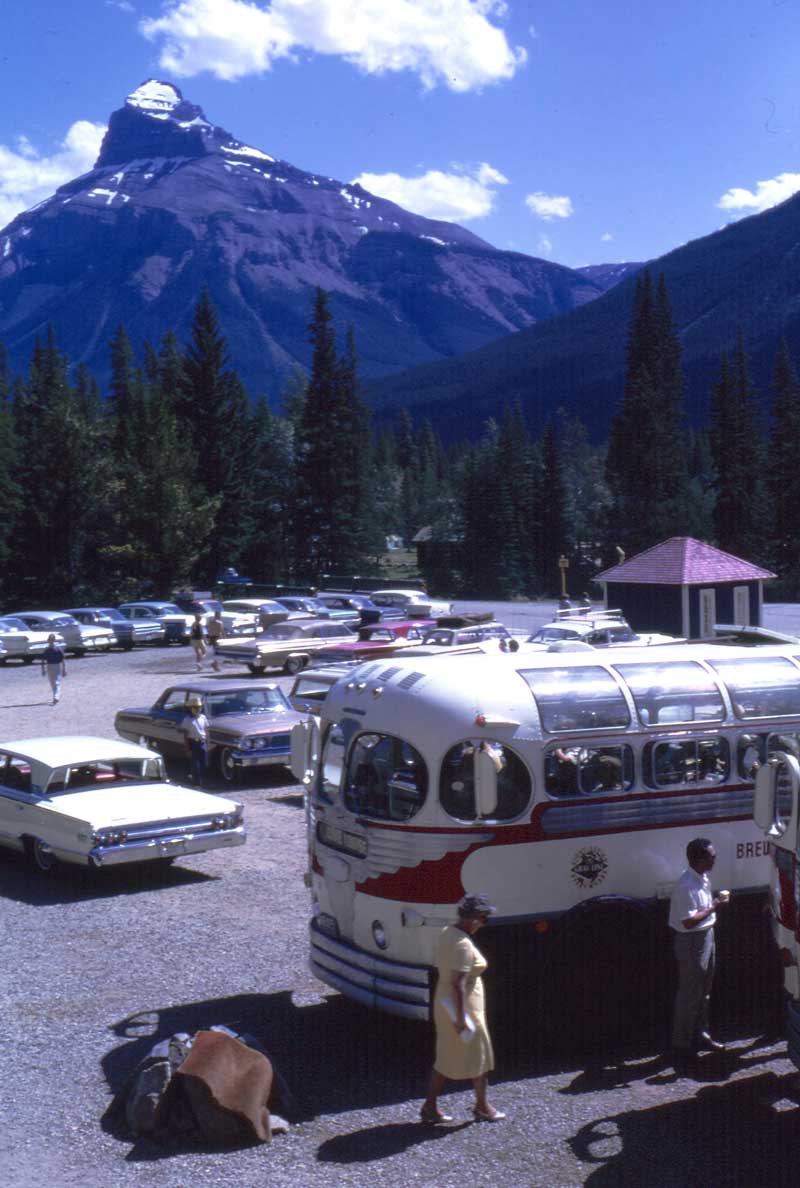 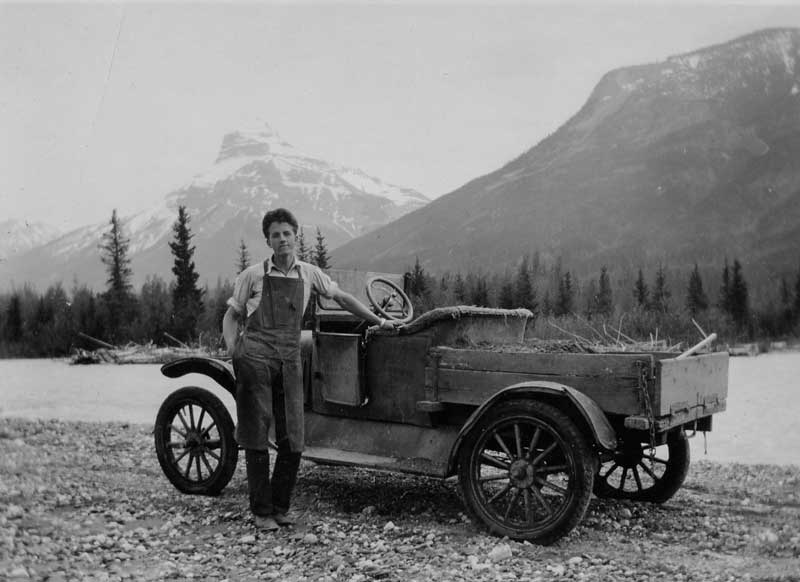 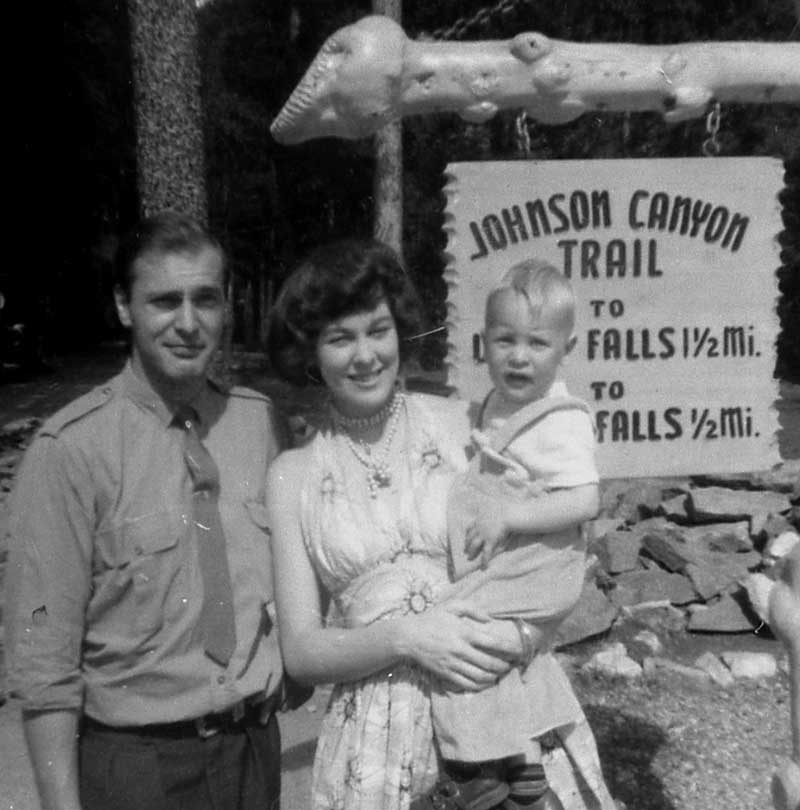 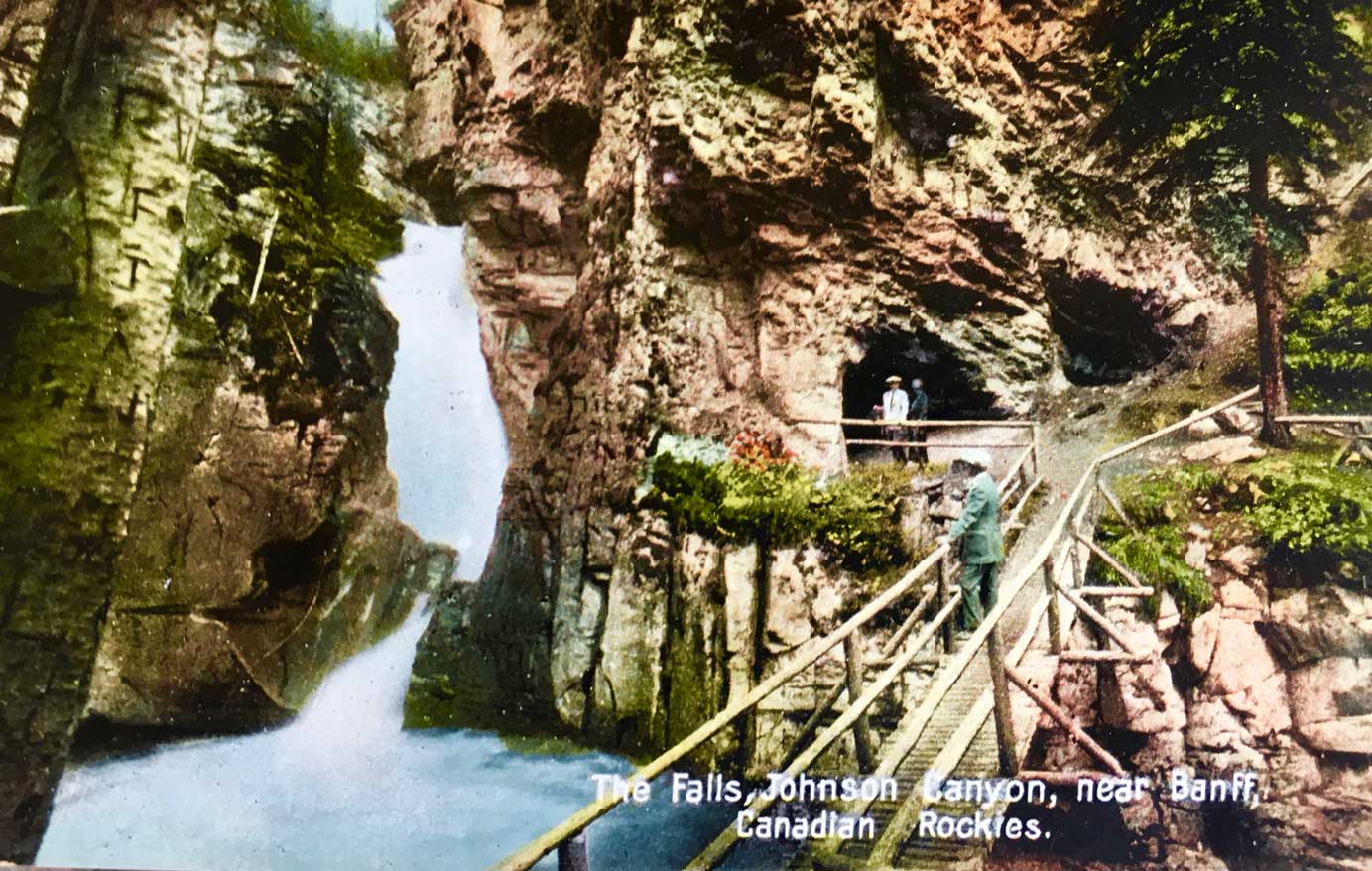